In 2019, the FTC filed a complaint against Amazon seller Cure Encapsulations for paying a site to write fake reviews for its product.

An Amazon spokesperson complimented the FTC action by claiming, “Even one inauthentic review is one too many.”

The spokesperson is right, yet fake reviews remain a big problem for many review platforms and their moderators. Far more than one inauthentic review lurks online, and these false ratings are hurting businesses. Furthermore, the FTC has a lot of ground to cover in catching up with fake reviews. For now, many review sites are taking action against fraudulent claims.

In this article, we’ll detail what you need to know about fake reviews, how to catch them, and how you can dispute them with a review site.

How common are fake reviews?

You could be dealing with a number of fake reviews, particularly as a big business.

One study estimates that over 60 percent of electronics reviews on Amazon are fake. Some experts claim anywhere between 10 to 30 percent of all online reviews are fake. 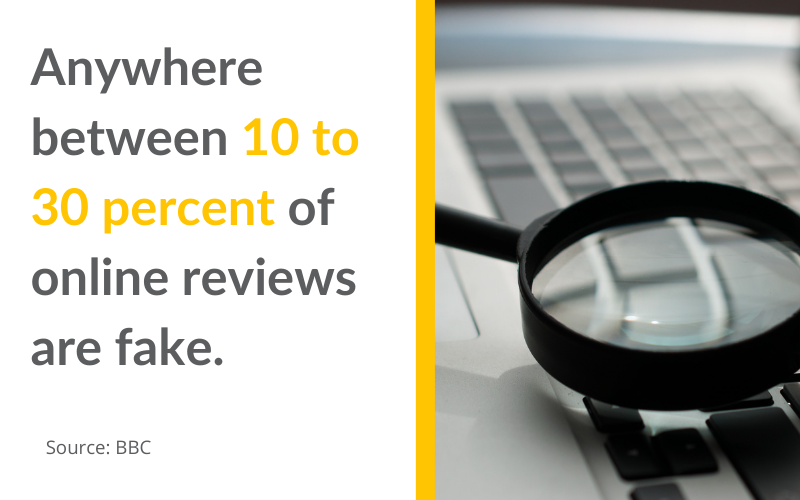 While it’s difficult to gauge the rate of fakes for each review platform, you can take the Chrome plugin Fakespot for a spin on a few popular review sites to learn that many ratings are unreliable. Many Amazon products toting four stars receive an F grade for truthfulness from Fakespot.

The consequences of a fake review

Buying and selling fake reviews can lead to legal action from other companies, action from the review platforms bombarded by the fakes, and even penalties from the FTC itself.

The FTC complaint from our introduction is only one example of a consequence. A recent suit pitted two competitors against each other. One business alleged that the other swarmed them with fake Google reviews, and this type of lawsuit isn’t the first of its kind.

Amazon recently deleted thousands of fake reviews off its platform; Amazon sellers can be notorious buyers of questionable reviews. The review platform itself has had to take a ruthless approach to moderation to encourage organic competition and limit fraud.

Sometimes, the attacker chooses themself as the target, paying for positive reviews.

Unsurprisingly, injecting your business’s reviews with fake positives wouldn’t last. One study found that soliciting fake reviews has a positive effect for one month, then the average drops as organic negative reviews roll in. The researchers suggest that low quality products use fake reviews to deceive consumers — not a good look if a company genuinely believes its product is worth buying. 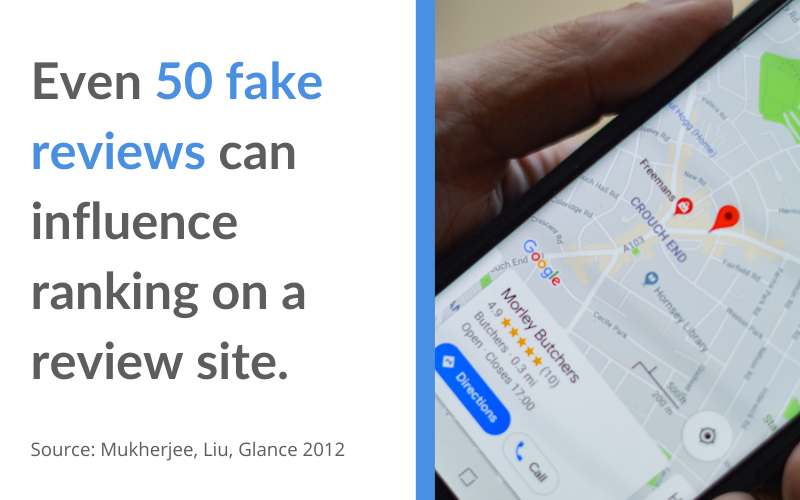 Even 50 fake reviews can influence ranking on a review site. The particular study that produced this finding experimented with TripAdvisor, but businesses on all review sites with a ranking system know how important it is to maintain high status.

As most business owners know, a drop in star ranking equates to a drop in revenue. Businesses with 4 to 4.5 stars earn 28 percent more in annual revenue than those with lower rankings. If a competitor targets you with fake reviews, they can cut your bottom line.

From the consequences above, we can see it’s imperative to spot fake reviews and report them. But to learn more about how to catch them, it helps to identify who is leaving these fake comments.

Though they’ve been targeted by lawsuits in the past few years, freelancers sometimes offer review-writing services to clients. Platforms like Fiverr formerly hosted these fraud writers, though the site has since tightened its guidelines.

Some freelancers still offer under-the-table review writing service. And the fake reviews come cheap: prices are rumored as low as $1 per review.

Working directly with a freelancer allows a company to control the messaging that goes into their fake reviews, which might make it more likely for businesses to cover their tracks by varying the tone and language of the comments.

But hiring a few freelancers to write illegal reviews wouldn’t work as quickly as the other paid option: reputation management companies.

These companies operate similarly to freelancers, but on a larger scale. The FTC is cracking down on these reputation management companies, such as the 2019 settlement against the company Devumi.

Competitors themselves might choose to save their money and write their own fake reviews. This is one of the most obvious fake review types. After all, a competitor has limited, in-house resources to attack other businesses. Additionally, competitors often lack the know-how to fool savvy moderators.

Have you lost a disgruntled employee that holds a grudge? They can fake your reviews, and they might expand their efforts to more than negative feedback on Glassdoor. Whether their reviews include false information or they create several accounts to give you a bad review, watch out for this type of reviewer.

A platform like Amazon has a system to detect connections between accounts, and they’ll notice if an account shares your computer or buys products and ships them to your address.

Read also: 9 Common Reviewer Personas and How to Respond to Them

Signs of a fake review

With so many reasons to leave a fake review, and so many types, how can you spot one? Experts point to a few signs that might indicate a review is fake.

Some review sites can verify a customer’s review. Review sites confirm this by tracking how the reviewer made a review, such as through an email CTA after a purchase or by working with the business to verify its customer database. For example, the review below has a "verified review" tag:

This is one signal of truth, but it can’t be the only signal on every platform. For Google reviews, the purchase must be made online. You can see why verified reviews shouldn’t be considered an all-inclusive standard.

Is the review highly positive or negative? Fake reviewers aren’t likely to list pros and cons but will lean entirely to one side in their comments.

Cornell University analyzed over 800 reviews and arrived at this finding: fake reviewers are more likely to focus on "I" and "me" in their comments. While creating an imaginary scenario where the business wrongs them, they focus on their own actions because it’s harder to infer what employees or staff might do and have the tale seem plausible.

If reviews in a close time frame include similar language and phrases, they could be fakes all penned by the same person or agency.

Watch for multiple reviews outlining an “unforgettable experience” at an “unbeatable price,” or reviews that all use two exclamation marks to end sentences.

Another review from “anonymous” living in Nowheresville, Kansas? That’s a symptom of a fake review. To swarm a company with fake reviews, you scrimp time on filling out a believable profile. 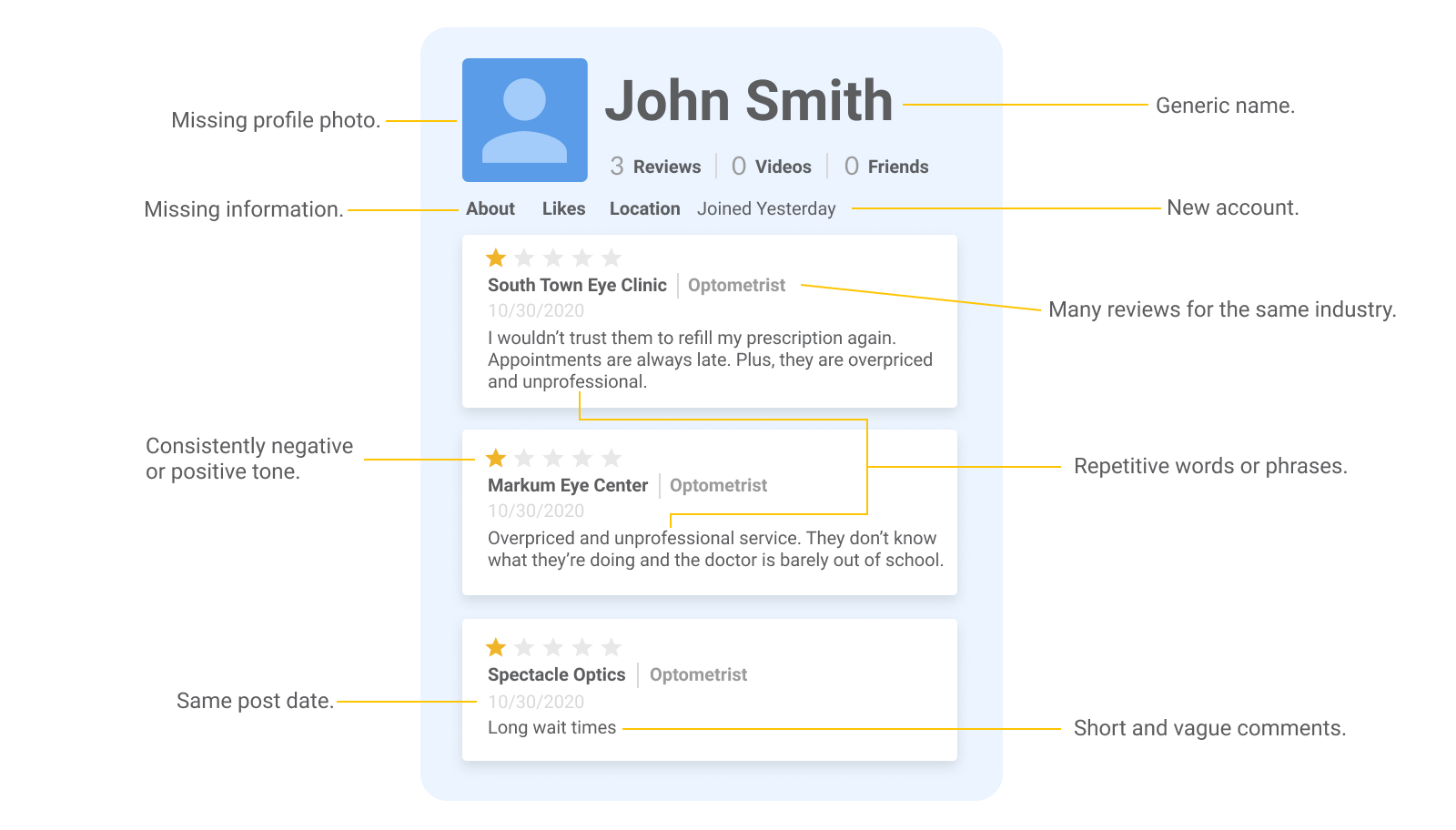 If a reviewer has only left a few reviews, they’re more likely to be fake. Bonus points if all the reviews are polarizing.

Good reviewers put time into their feedback and rate businesses over a period of years. They enjoy building credibility with their reviews  — that’s why the Google Local Guide and Yelp Elite programs exist.

New reviewers may be building the same credibility, or they may be providing fake feedback. That’s why a scant portfolio is another symptom of a fake review.

If a fake review is positive, the feedback may sound too promotional. The writer could repeatedly use the exact product name, company slogans, or cheesy descriptions.

A fake reviewer could say, “I enjoyed the stunning vistas from the balcony of my Deluxe Suite at Thatch Cottage Inn.” Regular reviewers may not be so picky about using exact product names, but will focus more on the specs of a product.

Too short or too long

Fake reviews lack any detail because spinning a tale makes it more likely for the business to refute their account. A fake review has trouble naming any names or recalling when their appointment was.

If a review shares an IP with other similar reviews, that’s a warning sign that the feedback is fake. This is something a moderator can catch more easily than a review reader, and moderators use IP research to flag and remove fraudulent reviews.

How to report a fake review

Do you think you’re a target for fake reviews? Or, do you suspect a competitor is using fake reviews to inflate its rankings? Here’s how to report false reviews on popular platforms. 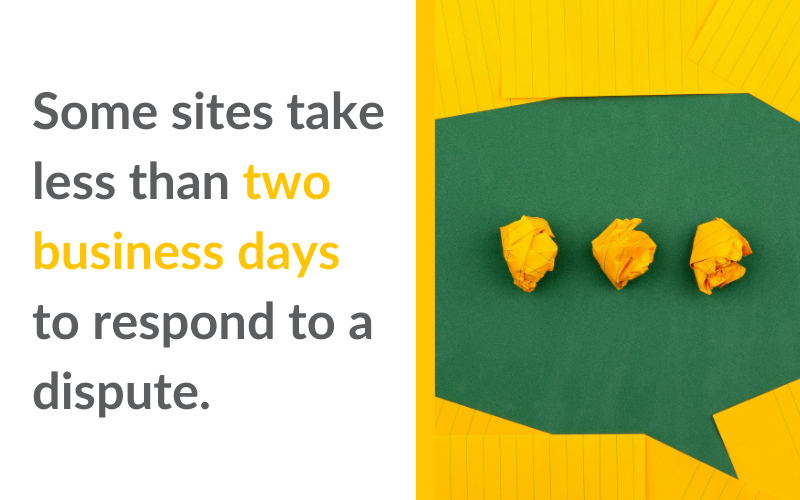 The dispute process for each platform will require a different level of communication. On some sites, you’ll be able to argue your case and provide evidence to dispute a review. On others, you’ll get no more than a report button.

Each site has its own guidelines. Grounds for removal will vary by review site. Some sites take less than two business days to respond to a dispute.

How to report a fake review on Yelp

Yelp offers these reasons for reporting in its dropdown menu:

How to report a fake review on Google

Unlike some other platforms, Google doesn’t give you a chance to explain why you’re reporting the review — this weakens your case. The options for removing a fake Google review include:

How to report a fake review on Facebook Reviews

As you can see, Facebook includes few detailed reasons relevant to reporting reviews. Many of these criteria are applied to its regular posts.

How to report a fake review on Trustpilot

Trustpilot recommends replying first to get more information and determine if your reviewer is authentic.

If you still need to report a review, visit the “Service reviews” section of your business account.

What’s helpful about Trustpilot’s reporting process is it includes details about what is and isn’t reportable before you submit your dispute. Here are the main reasons you can report a Trustpilot review:

How to report a fake review on Best Company

But if you do find a suspicious review and flag it, our dispute team will reach out to let you know the status of your request usually within two business days. They remove reviews for these reasons:

Work with a Review Site That Moderates for Fake Reviews

Our team of moderaters deletes fake reviews before they ever go live. Learn how Best Company protects businesses from fraud.

What is social proof?  You see a delicious d...

What Results Can You Earn from Best Company's Review Solicitation?

How to Respond to Reviews: Your Comprehensive Guide

You nurtured a lead, you closed a sale, and you f...